Members of the Chedraui family through Cubo Capital are in the process of becoming 98.79% owners of Grupo Consupago, up from 49.49% as of November 22, 2019 when the deal was announced by Consubanco, a Grupo Consupago subsidiary. The Chedraui family takeover is subject to approval by the National Banking and Securities Commission, the Bank of Mexico, and antitrust regulators in Mexico.

Cubo Capital plans to acquire all of the shares in Grupo Consupago currently held by SGREC LLC, which was controlled by Sherman Financial Group according to Consubanco’s 2018 annual report.

So far Consubanco has not announced any changes to the shares held by SFGMX LLC, a separate company controlled by Sherman Financial Group at year-end 2018.

Ownership of the 1.21% in Grupo Consupago that would remain outside of Cubo Capital was not announced. Alfredo Mauricio Flores Ibarrola and Francisco de Paula Hernandez Weber held 1.09% of Grupo Consupago as of the end of 2018.

Below: Excerpt from Consubanco’s 2018 Annual Report 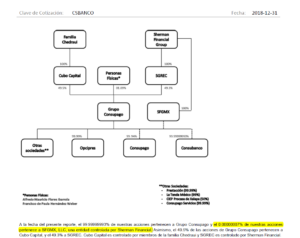