Grupo Chedraui co-founding director Antonio Chedraui Obeso was the president of a Delaware corporation, Oceana Apartments, Inc., that owned an oceanside condominium in the exclusive Bal Harbour area next to Miami Beach, Florida.

The following is a timeline of the public records ChedrauiLeaks was able to find that we believe are relevant to the luxury penthouse condominium owned by Oceana Apartments, Inc. in Bal Harbour, Florida.

According to a deed dated February 6, 2017, Oceana Apartments, Inc. purchased Unit PH 2702 South of the Oceana Bal Harbour Condominium at 10201 Collins Avenue in exclusive Bal Harbour next to Miami Beach, Florida, for at least $11,950,000, according to the transfer tax listed on the deed. On March 28, 2017, the purchase deed was refiled in Miami-Dade County with a higher transfer tax, showing a $12,222,000 purchase price with no explanation of the change. ChedrauiLeaks was unable to find any loans recorded with Miami-Dade County for the purchase, so we believe that the purchase was what is known as a “cash purchase.” 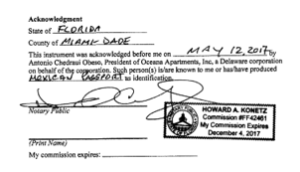 JP Morgan Chase Bank acknowledged the “full payment and satisfaction” of the $4,000,000 mortgage that Oceana Apartments, Inc. had obtained in May 2017 according to a Satisfaction of Mortgage signed February 26, 2019.

The return address printed on JPMorgan Chase Bank’s release of the mortgage identified “Lomas de ChapultepecCiudad de Mexico 11000” in Mexico City for Oceana Apartments, Inc. but without a street address (see below).

ChedrauiLeaks was unable to find any public records showing any other loans involving Oceana Apartments, Inc. in Miami-Dade County.