Graciela Hank Gonzalez signed the mortgage for the 2014 loan as the sole manager of AGI Hamptons LLC. 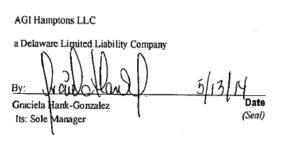 AGI Hamptons LLC was fully released from the 2014 mortgage secured by the mansion on April 7th, 2016 – about two years from when the loan was issued.

Jose Antonio Chedraui Eguia is an independent member of the board of Grupo Financiero Banorte as of January 3rd, 2020.

ChedrauiLeaks.org has noticed that the media in Mexico contains very little information about the business dealings and personal assets in the United States of what could be termed Mexican elites, wealthy business people and politicians. ChedrauiLeaks is not stating that members of the Chedraui family or its businesses had any involvement with the property described above.