San Diego, November 20, 2019 – An investigation by ChedrauiLeaks has revealed Hank family ties to the purchase of Elba Esther Gordillo’s seaside mansion outside San Diego for $3.75 million on November 14, 2019. ChedrauiLeaks, as a result of its investigation, believes that the name “Emilio Hank,” as the name is signed on loan documents and corporate records for the transaction, identifies the son of Jorge Hank Rhon, Emilio Hank Talancón. Public records connect addresses used by Emilio Hank in the Gordillo transaction to a close associate of Emilio Hank Talancón (Guido Murguia) and separately a businessman (Arturo Alemany) whose clients included the Jorge Hank Rhon family company Grupo Caliente.

For her part, Elba Esther Gordillo’s rumored companion Luis Antonio Lagunas Gutiérrez traveled to San Diego to sign the deed for the sale on behalf of the Gordillo-connected company that had originally purchased the mansion for $4 million in 2010, Comercializadora TTS de Mexico SA de CV.

Public records in the United States do not typically reveal the identities of people behind companies when they are used to purchase multi-million dollar properties. However, ChedrauiLeaks believes that the “Emilio Hank” name, appearing in public records connection with other names (Arturo Alemany and Guido Murguia) that are Hank family associates, refers to Emilio Hank Talancón, the son of Jorge Hank Rhon.

Emilio Hank, as manager of a Delaware company named “1 Green Turtle LLC,” signed a loan document for $3.4 million, secured by the mansion, on November 14, 2019.

The deed for Gordillo’s sale also provided the same mailing address for Emilio Hank himself.

The same address was registered with California in August, 2019, for a company named “Hamco Expeditions LLC” by Guido Murguia.

A person by the same name (Guido Murguia) was CFO of Caliente Interactive, itself a subsidiary of Grupo Caliente. 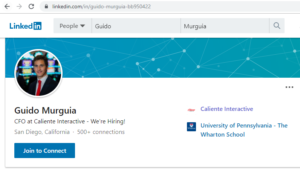 ChedrauiLeaks.org is a project of the United Food and Commercial Workers International Union, to investigate the connections between the Chedraui family and other Mexican elites as well as their links to business and property in the United States, the business and political activities of Mexican elites generally, and provide information about the struggle of El Super workers for a better life. ChedrauiLeaks is not stating that any members of the Chedraui family or its businesses had any involvement with the companies or property referenced in this press release.